Things I Learned
​from Fat People on the Plane 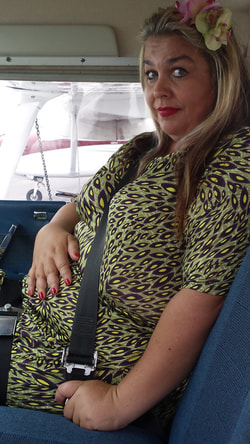 ​Sit next to the fat lady on the airplane – and this time listen to what SHE has to say.

This body wants to MOVE – across the country, around the world, in gyms and yoga studios. "Things I Learned from Fat People on the Plane" is about living fully in a world that hates fat. It’s about movement of all kinds – travel, exercise, sex and how fat folks are often expected to stay so still they disappear.

"Things I Learned from Fat People on the Plane" asks, "What’s a fat, sexy middle-aged babe have to do to get a ticket on the on the Respect Express (with a seatbelt big enough for safety)?"

[Things I Learned is] a mixture of dramatic storytelling and envelope-pushing honesty to discuss body image and break down the stigma American society places around being a fat person.
– The Daily Nebraskan

Dark's performance is a fine example of riveting storytelling combined with insightful, intersectional analysis. Dark reminds us - in comic, evocative tales - that some bodies travel a much easier path in our thing-loving culture, a culture of narrow airplane seats and - too often - even narrower minds. Accessible, timely, and incisive, audiences will leave on a note characteristic of Dark's work: looking forward to the future, with optimism, where all bodies make culture - a culture that will be all the more fine if only we can embrace our bold, diverse embodiments.
–  Dr. Natalie Wilson, Author of Seduced by Twilight

Kimberly has an uncanny ability of shining light on those things society does such a thorough job covering up. She speaks out loud the things we have been taught to keep to ourselves about body size and beauty. Yet she does it in a way that is filled with kindness and acceptance. As an audience member, Kimberly's performance exposed my privileges while not diminishing my own humanity. Kimberly's sociological expertise frames her creative work, resulting in a show that is informed by evidence-based research, while never compromising the intimacy of good storytelling.
–  Dr. Mary Robertson, Sociology, Cal State San Marcos.

Kimberly Dark's 'Things I Learned from Fat People on the Plane' is a stirring production that causes you check your privileges while she gives voice to an invisible and criticized group in our society. You can't help but fall in love with her...
– Dr. Grace Shinhae Jun-Mills UCSD Dance Department

'Things I Learned from Fat People on the Plane' left me holding handfuls of questions--but they're better questions than I had before. Kimberly Dark lets the audience members discover some of their own answers--how do we redirect conversation when people stigmatize or judge? She magically grants us change agent status, reminding us that we've always had the brains, courage, and heart we need to transform culture.
– Professor Wendy Smith, Mesa College English Department

'Things I Learned from Fat People on the Plane' might be the only show I've ever seen that's made me laugh, blush, and question my assumptions at the same time. Kimberly brings the audience in with her honesty and charisma and doesn't let them go until the final applause. Her performance's firm roots in love and social change linger as you reevaluate the impact of your words and actions.
– Mona Alsorami, English Professor, San Diego City College

Kimberly Dark's performance of 'Things I Learned from Fat People on the Plane' was captivating, thoughtful, humorous, and engaging...
– Dr. Season Ellison, Women in Theatre Program

"a masterful mix of performance, storytelling, and dialogue about fatness, stigmatization, dignity, and kindness.”

"Awesome show... I identify with body diversity because of being a small man. Lots of invisibility to deal with.”

“very well written, both funny and sad and quite thought-provoking.”

"Tonight's performance was awesome. First I cried, then I laughed, then I cried and laughed all over again. Do not miss this!  Her stories resonated so deeply with me. I recall several similar instances in my childhood. But what she most gave me tonight? Courage and hope.  And yes, I think she's hot.”

“As a thin white guy, usually conversations about thin privilege start off by insulting me. This is the first time I’ve enjoyed a discussion of thin privilege. You’re not insulting anybody.”

​As I've been performing 'Things I Learned from Fat People on the Plane' this week, a number of people who've either known my work over the past two decades are commenting on something I discuss in the show: coming out fat. Literally, this show is functioning as me "coming out fat” for those who are claiming they've never thought of me as a fat person.

Think about how powerful fat stigma must be, if in order to think well of me as a thinker, as an activist, as a writer, in order to think of me as attractive and as a viable social participant, my fatness must be erased. One audience member even expressed anger that I was forcing her to look at me as a fat person. This is how powerful our denial of cultural oppression can be. How dare I force her to confront an aspect of my subjugation that she has decided she's doing me a favor not to see.

Now think about how this applies to people of color talking about racism. To people with disabilities talking about able-ism. To women about sexism. Etc. We are colluding to erase the suppression of a MAJORITY of people. My hope is, that when we begin to reveal the way body hierarchy functions to preoccupy so many of us, we can stop policing appearance and start embracing diverse expressions of humanity. We will no longer be soothed by being “more attractive” than someone else and turn our attention to more useful things, like listening, love and looking for the best in one another.